Torrential rains in July/August 2015 triggered by Cyclone Komen brought devastating damages to 12 of 14 states/regions in Myanmar, leaving more than one hundred people dead, cumulatively 400,000 households displaced, 1,000,000 acres of farmland damaged due to floods and landslides.

The initial activities were hampered as the roads were still covered with mud, with the river level still high until mid-September.  The logistic challenge continued in October as the rainy season in 2015 prolonged, and the General Elections in November inevitably affected and delayed some of the planned activities.

In September 2015, in collaboration with our partner, HelpAge International, and with support from the Japan Platform, PWJ embarked on a project targeting 20 flood-affected villages in Pwintbyu Township, where severe flooding had devastated much of the region’s farmland, a vital source of livelihood for communities in the area.

With agriculture being the main livelihood for people in this township, it was imperative for communities to restart farming activities immediately in order to sustain their incomes. As a significant proportion of land had been critically damaged and crops and farming equipment washed away by the deluge, communities were left with little resources to regain income generation opportunities.  PWJ supported 606 financially-vulnerable households to cultivate their lands by renting cows for ploughing and providing farming tools and seeds for rapid-growing crops such as chick peas, butter beans and garden pea as well as fertilizer.

Most of the latrines in the target villages were destroyed or severely damaged by the flood, and there was a potential risk of water-borne disease and health problems to spread.  In order to recover the sanitary environment, the project built a total of 750 latrines, which covered 1,135 households.  Local carpenters and laborers, who were affected by the flooding themselves, were employed for their construction and thus given additional income opportunities.  Water tanks were added to those 130 latrines to be used by families with older people, people with a disability and small children to enable their easy access to clean water for washing hands and assist in keeping the latrines clean.

After the flooding, families with financial difficulties were obliged to allocate what money they had to purchase food and water to meet their basic needs, leaving no cash spare to buy essential hygiene items.  PWJ distributed 300 hygiene kits to these households composed of 17 items including soap, toothbrushes, towels, water purification filters, etc., to support them in maintaining good hygiene practice and alleviate the risk of spreading disease.

The above activities were successfully implemented with the valued participation of communities themselves through 20 Village Disaster Response Committees (VDRCs), which were established in each village as part of the project.  VDRC members played an important role, liaising between the project staff and the target population to assess the needs, identify most appropriate ways of intervention, and facilitate the implementation of project activities.  It is anticipated that the experience and positive work done by VDRCs during the intervention will help build their capacity and enable communities to be better prepared to respond to potential disasters they may face in the future.

Of all affected townships in Ayeyarwaddy Region, Ingapu Township had the largest number of affected people of more than 68,000 (32% of township population).  PWJ launched a recovery assistance project in September 2015, conducting first a rapid assessment, using questionnaires for quantitative/qualitative data and focus group discussion method, and identified 35 most-needy villages for assistance target.

In order for the villagers to clean and repair their damaged houses, 180 sets of knives, shovels, buckets, hoes, and machetes were locally procured and distributed.  PWJ also repaired 36 hand-dug/tube wells and latrines and newly installed 57 ceramic water filters, combined with the rain water sourcing mechanism, for safe drinking-water.

To three villages was introduced a river water collection system, which includes sand and activated carbon filtration system and UV sterilization.  The strategic locations of these 3 villages near the river make it possible for the system to provide the safe filtered drinking-water to the surrounding villages in time of flooding in future as well as during the dry season, when their wells often dry up.  12 damaged schools were repaired, and 16 schools were equipped with ceramic water filters. 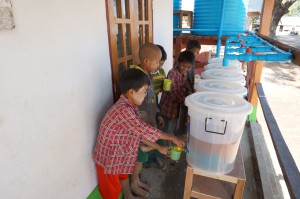 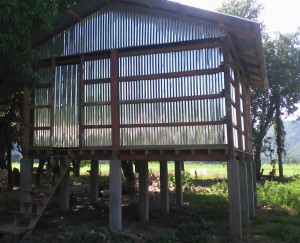 Hpa-an and Hlaingbwe, which were two most affected townships in Kayin State, were selected as assistance target.

PWJ distributed 150 bags of fertilizer to 22 villages, with which the villagers re-cultivated some 300 acres of farmlands that had been washed away by the flood.  Four damaged hand-dug wells were repaired and improved to become flood-resistant, and one hand-dug was newly constructed in a flood-free location in a village.

In three villages, high-floored seed shelters were constructed.  These seed shelters will be used for storing not only seeds but fertilizers, farming tool, etc., to save them from being damaged by future floods so that the residents of these farming communities will be able to start re-cultivating their lands, in case of future flooding, as soon as the water recedes.  PWJ also provided four motor-boats and 10 life-jackets to assist local recovery activities.

The above activities in Ayeywarwady Region and Kayin State were implemented in partnership with a local partner, Community Development Association, with support from the JTI Foundation.