The Tohoku region of Japan — a place of forests and ocean

Though Japan is an advanced industrial nation, two-thirds of its territory is covered with forest and its coast line is the sixth longest in the world — longer than those of China and the United States. Japan is said to be a country of forest and coastal ocean. In the Japan of the past, the abundant forest cultivated an abundant coastal ocean, and Japanese people lived among a nexus of humans, forests and ocean. However, as the economy grew, these kinds of connections were severed in many regions.

The coastal part of the Tohoku region, which suffered great damage from the Great East Japan Earthquake of March 11, 2011, is a region where ties among humans, forest and the ocean remain deep even in modern Japan. Since the disaster, Peace Winds Japan (PWJ) has been engaged in activities to assist with reconstruction that emphasize restoring regional community. A reconstruction initiative that emphasizes the connections among humans, forests and the ocean has begun in the city of Kesennuma, Miyagi Prefecture, and PWJ has supported this initiative, which matches its own philosophy of regional regeneration.

Today, with the aim of reconstruction and regional regeneration, construction is underway in the Karakuwa district of Kesennuma City of an exchange center for trying products created from the interconnection of humans, forests and the ocean or for having an experience related to harvesting local foods. This exchange center is expected to begin operating in earnest in the spring of 2015, four years after the earthquake.

The beautiful scenery of Karakuwa Bay

During the late 1960s, water quality had worsened in Kesennuma and red tides had occurred. The flesh of oysters that ate this red tide plankton tuned red and became completely unfit for sale. So for 25 years, to return the coastal ocean to one of abundant oyster cultivation, the Mori wa Umi no Koibito (The Forest is the Ocean’s Lover) movement of tree planting in the forest has been carried out and 30,000 broad leaved deciduous trees have been planted so far. That’s because the nourishment from the upstream forest carried by rivers, causes the growth of phytoplankton, the food of oysters. The leader of this movement has been Shigeatsu Hatakeyama, chairman of the nonprofit organization Mori wa Umi no Koibito.

The NPO’s Vice Chairman Makoto Hatakeyama is the younger brother of the chairman. After he left their home area to study about the environment and other topics, he returned and became an oyster farmer like their father, and he has also been involved in efforts to regenerate the interconnection of humans, the forest and the ocean.

Like many of Japan’s rural areas, the Karakuwa district had been experiencing an ongoing population decline since before the earthquake. Young people had been migrating to cities to go to school, find jobs and seek urban lifestyles. Population aging has progressed and as of2014, people aged 65 or older had become 34.2% of the district’s population.

The earthquake took place even as regional regeneration was needed and Karakuwa district suffered great damage. In the block where the Hatakeyama family lived, 44 out of 52 households were washed away by the tsunami and Makoto Hatakeyama himself was swept up in the waters before being rescued. 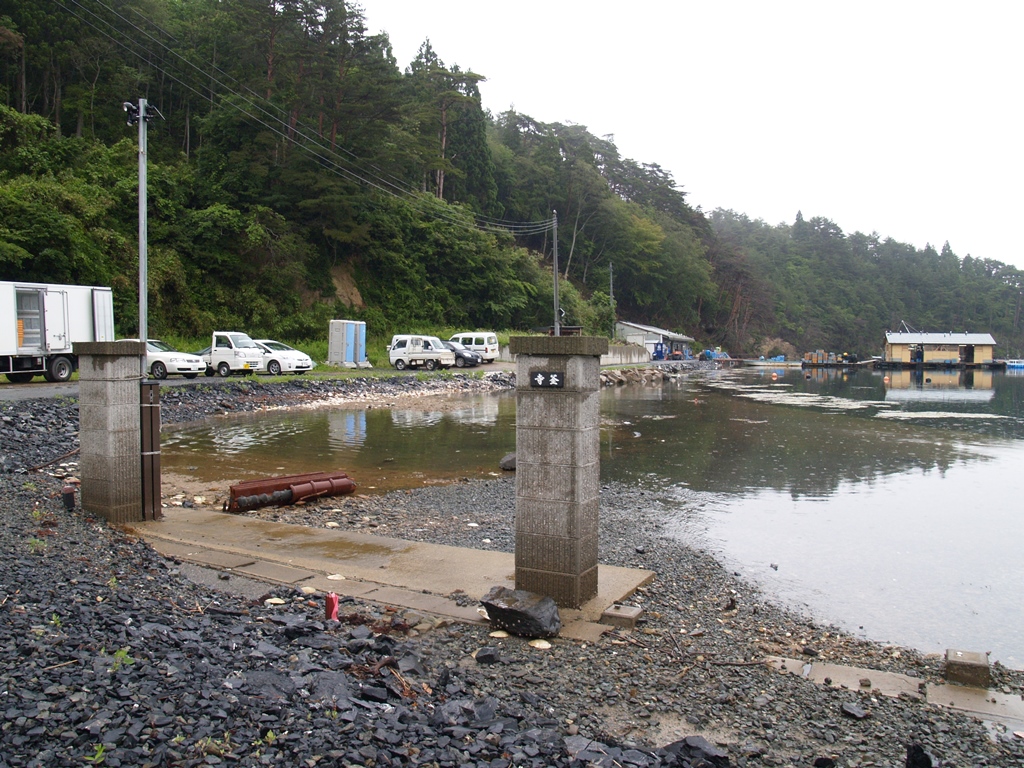 As Makoto, other locals and people who had come from outside the region to support post-earthquake reconstruction discussed what kind of region they would rebuild post-earthquake, initiatives emerged centered on the key phrase “the connection between humans and nature.” At night as they surrounded a bonfire, they had the idea of smoking oysters. To move forward with reconstruction centered on “the connection between humans and nature,” they started the nonprofit Peace Nature Lab (PNL) and it went to work.

An exchange center for experiencing flavors and nature

So far PNL has operated Morisatoumi-Kobo Workshop, which emphasizes the importance of the interconnections between humans, the forest and the ocean. It sells smoked oysters and original sweets online and in certain cafes in Tokyo. Left： Smoked-oyster pasta of the kind to be served at a cafe next to the exchange center
Right： “Forest cooties”, hard type cookie made using local ingredients

In addition to this, the construction of an exchange center for experiencing products created from the interconnection of forests, humans and the ocean has begun. PNL is the main organization behind the construction, and PWJ, the JTI Foundation and others are assisting with funding and program implementation.

The exchange center is a 60 square meter, one-story building. Construction began Dec. 1, 2014, with a goal of finishing and opening for business by April 2015. The exchange center will be built near the PNL headquarters and near it a cafe will be operated using a camping trailer. It will sell smoked-oyster pasta, seafood curry and “forest cookies” made using walnuts picked up on local beaches. Customers will be able to eat them inside or outside while enjoying the sight of the ocean and forest.

Artist’s rendering of the completed exchange center. Construction is underway in the the Karakuwa district of Kesennuma City. (The blue structure on the right is the cafe operated out of a camping trainer.)

One more concept in the plan is experiencing nature. Plans include harvesting oysters cultivated nearby, then cooking and serving them in the cafe; having customers grill fish they just cooked and eat them; and summer barbecues. Future plans include having visitors do the work of “mating,” or attaching oyster larvae to scallops and the like, and six months later harvest and eat them.

When the cafe and experience program get on track, one of their goals will be to create employment in the region.

“I want to be in a place between nature and people and aim for a life in harmony with nature while working toward regional regeneration. At the cafe, I want to stick to using regional ingredients,” says Makoto Hatakeyama, representative director of PNL.