Peace Winds Japan (PWJ) has accomplished the “Small Agro-Farmers Income Improvement (SAFII)”, a three-year project in Sindhupalchok district, funded by the JICA Partnership Program (JPP), together with the cooperation from the Government of Nepal and PWJ’s local partner organization, Institution for Suitable Actions for Prosperity (ISAP：https://isap.org.np/).

The earthquake that struck Nepal in 2015 claimed a great number of casualties and inflicted immense damage to the afflicted area. Although emergency relief from the government and various organizations were provided shortly after the earthquake, recovery remained a challenge in the long term. When PWJ began its operation in Nepal in 2015, people in the afflicted area were barely able to sustain their livelihoods at a tolerable level.
Therefore, we have started the SAFII project to improve their livelihood though selling vegetables since 2018.
Mr. Krishna Bahadur Shrestha, a beneficiary of the project was a cereal crop farmer, but worked in a hospital as a helper during the day, since his farmer earnings were not enough to feed the family of six. However, with his house collapsed and difficulty to manage the crops due to the 2015 earthquake, his household budget tightened than ever before. It was then, when Mr. Krishna heard that vegetable farming can make good profit and began so, despite the limited technical knowledge. For the first season, he earned 40,000 Nepalese rupees (Around 340 US dollars), which motivated him provisionally, but the plastic house he built with loan soon torn apart and his life was all back to the beginning.
Nevertheless, even in such adverse situation, Mr. Krishna did not lose hope. He approached the local government and asked for available support, where he came across PWJ and ISAP project supporting local farmers. Accordingly, he contacted the project team and expressed his desire to take part in the project.

Mr. Krishna standing confidently in front of his farm

After joining the project, Mr. Krishna attended all trainings and meetings with great enthusiasm, learned various technologies, and visited commercial vegetable farms. Moreover, he was selected as a leader farmer of the project., where he himself developed the knowledge of vegetable production and marketing. Currently, he owns 3 plastic houses (2 supported from SAFII, 1 from municipality) in 1,000 square meters land where he grows tomatoes, cauliflowers, cabbage and other vegetables. 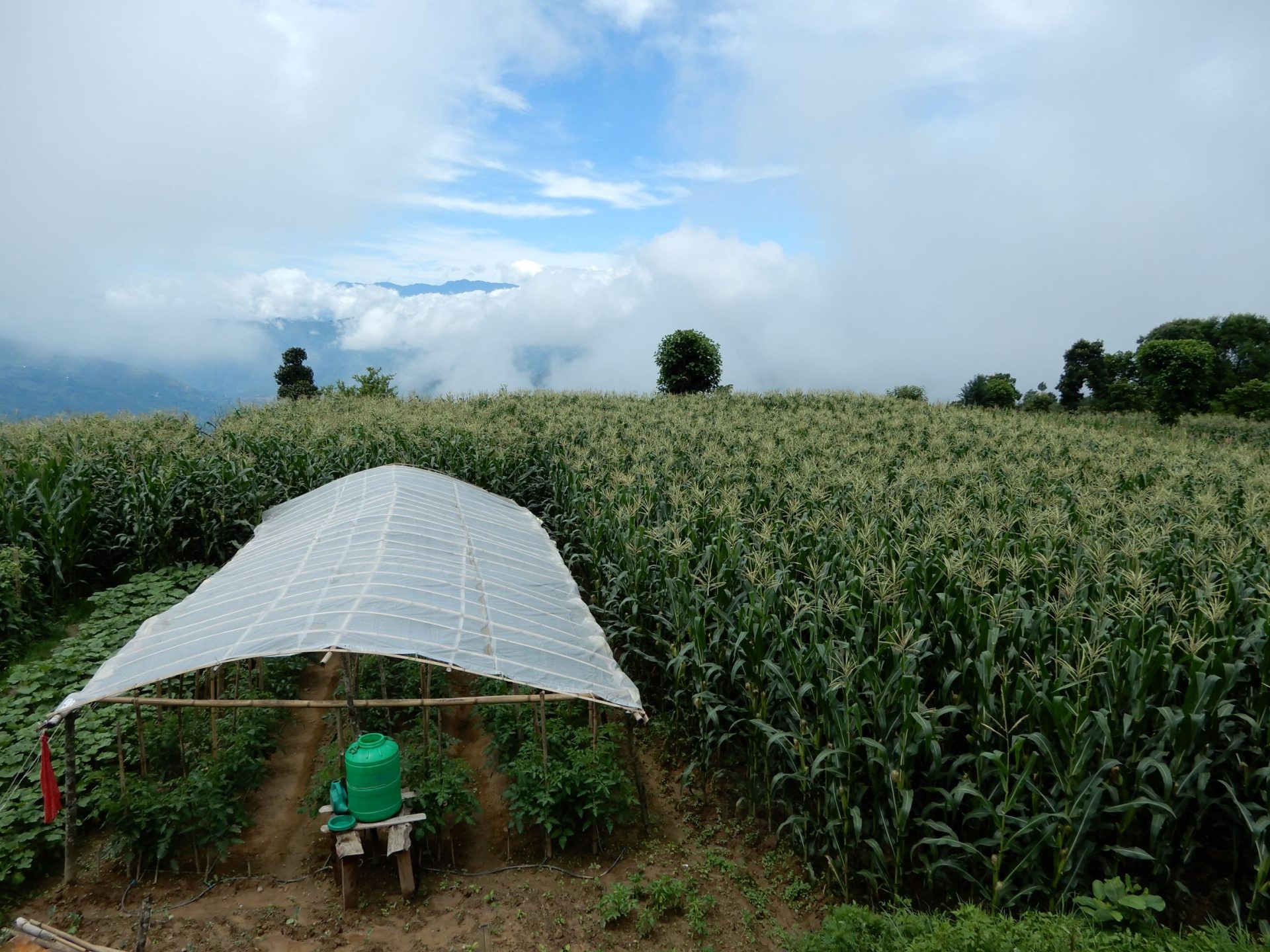 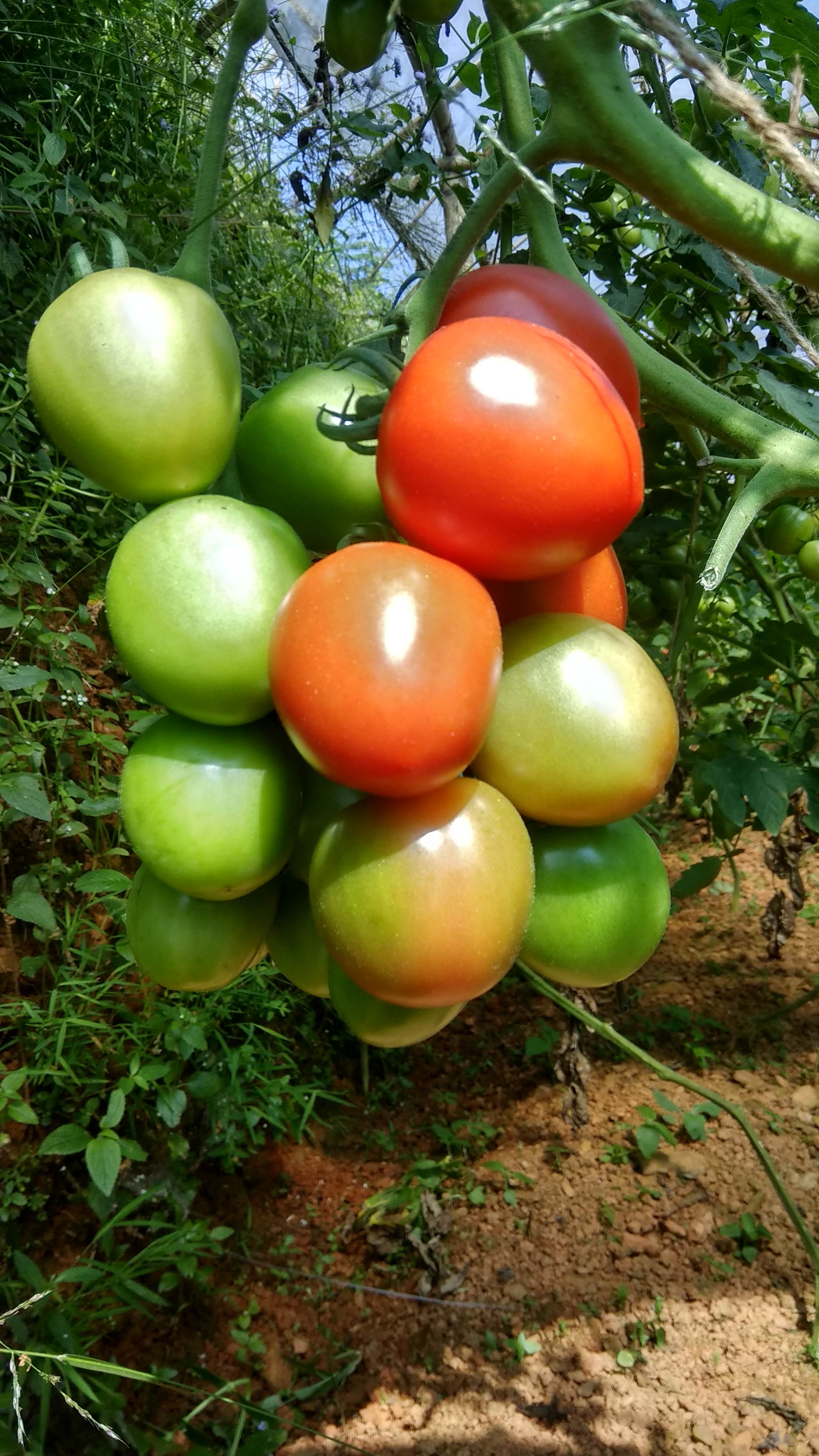 Tomatoes made in the plastic house

As a result, his latest annual earning was 180,000 Nepalese rupees (Around 150 US dollars). Despite the fact that he could barely cover household expenses previously, currently, not only does his family need to purchase vegetables for themselves, but he can even save money from its sales. He is saving 300 rupees (Around 2 US dollars and 50 cents) every month and saved approximately 4,000 Nepalese rupees (Around 34 US dollars) in the past year. Seeing his progress in farming, both his sons returned home to help his farther with vegetable cultivation .

Mr. Krishna cutting the material for the compost in front of other villagers

In 2020, due to COVID-19 pandemic, the country was under lockdown for three months which exacerbated the livelihood of people by loss of jobs and slash in salaries. However, thanks to the SAFII project, Mr. Krishna was able to keep up the vegetable production going and gain enough income throughout the lockdown. He happily states, “Thanks to the project, I was able to improve the living standard of my family. My children were able to attend good schools. Once COVID-19 calms down, I plan to expand my production.”
Furthermore, as a leader farmer, he started sharing his technical knowledge to other farmers in community. PWJ hopes that he and many others can sustain income improvement through vegetable production spread through SAFII.
Through the SAFII project 20 farmer groups ,consisting with a total of 478 farmers were formed, were equipped with technical trainings, material support, and frequent monitoring visits to boost the production and marketing of vegetables in order to shift the subsistence agriculture to commercial purpose agriculture.
As a result, 92% of the farmers have planted new variety of crops and have raised the overall production of vegetables by 39% and sales by 68%. This has led to the increase in agriculture income by 52% compared to three years ago when the project began. We anticipate that vegetable farming will contribute to the stable income of villagers continuously.

PWJ and ISAP will continue to support farmers in the district and will implement livelihood improvement projects in Nepal. Upon the implementation of the project, your continued support is highly appreciated.

Thank you for your interest in supporting the activities of Peace Winds Japan Nepal.
Your financial contribution will help sustain and expand our support to those we assist.