As the drawn-out conflict in Syria intensifies, millions of Syrians have been internally displaced, with many others fleeing into neighboring countries to escape the fire and instability. KRI also experienced a massive influx of Syrian refugees after August 15th 2013, which also brought tens of thousands of Syrian school age children into KRI. Therefore, there was an urgent need within the education sector to respond to this emergency so these children would not stay “out of school” for a substantial period of time. In some of newly established refugee camps, children are attending temporary tented schools, but the space is quite limited for a large number of students and also the structure would not be adequate for harsh weather conditions during the coming winter.

The schools constructed by PWJ in partnership with UNICEF are comprised of prefabricated classrooms, sanitary facilities including latrines, a shade area and a playground for outdoor activities. The design and layout aim to ensure a safe and protective learning environment for students.

“All my kids were doing very well at school in Syria. I have to make sure as a mother that they continue studying without having any gaps here in the camp. It’s good that they now have classes in temporary tented schools but prefab classrooms will be better considering the very tough winter we will have to face very soon”, a mother of three from Qamishli said at Kawergosk Refugee Camp in Erbil Governorate. In Kawergosk, PWJ’s school construction is expected to complete by the end of this month.

In coordination with the local authorities, UN agencies and other NGOs, PWJ will provide continued assistance in the education sector for these Syrian refugee children. 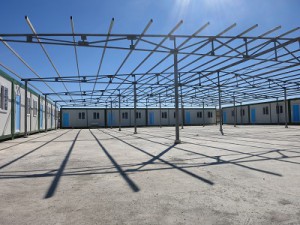 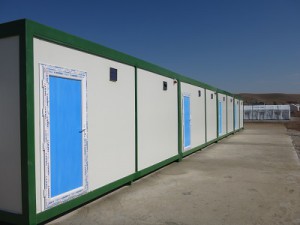 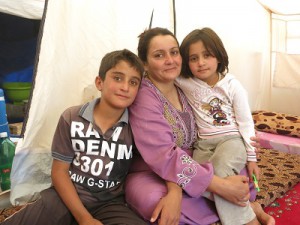 Photo(left):containers to be used for classrooms
Photo(right):a Syrian refugee mother and her children looking forward to go to school

About Peace Winds Japan
Peace Winds Japan (PWJ) is a non-governmental organization (NGO) dedicated to support of people in distress and threatened by conflict, poverty or other turmoil. With its headquarters in Japan, PWJ has been operational in many parts of the world since 1996.

UNICEF’s report on this project:
Syrian Crisis; In northern Iraq, 12-year-old Dima finds a glimmer of hope in a tent school for Syrian refugees